We all know “Necessity is the mother of all inventions”. And similarly Git was also invented to fulfill certain necessities that the developers faced before Git. So, let us take a step back to learn all about Version Control Systems (VCS) and how Git came into existence.

Version Control is the management of changes to documents, computer programs, large websites and other collection of information.

There are two types of VCS:

Centralized version control system (CVCS) uses a central server to store all files and enables team collaboration. It works on a single repository to which users can directly access a central server.

Please refer to the diagram below to get a better idea of CVCS:

The repository in the above diagram indicates a central server that could be local or remote which is directly connected to each of the programmer’s workstation.

Even though it seems pretty convenient to maintain a single repository, it has some major drawbacks. Some of them are:

This is when Distributed VCS comes to the rescue.

These systems do not necessarily rely on a central server to store all the versions of a project file.

You will understand it better by referring to the diagram below: 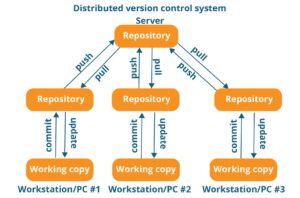 The act of cloning an entire repository into your workstation to get a local repository gives you the following advantages:

After knowing Distributed VCS, it’s time we take a dive into what is Git.

Git is a Distributed Version Control tool that supports distributed non-linear workflows by providing data assurance for developing quality software. Before you go ahead, check out this video on GIT which will give you better in-sight.

Git is a free, open source distributed version control system tool designed to handle everything from small to very large projects with speed and efficiency. It was created by Linus Torvalds in 2005 to develop Linux Kernel. Git has the functionality, performance, security and flexibility that most teams and individual developers need.

Free and open source:
Git is released under GPL’s (General Public License) open source license. You don’t need to purchase Git. It is absolutely free. And since it is open source, you can modify the source code as per your requirement.

Speed:
Since you do not have to connect to any network for performing all operations, it completes all the tasks really fast. Performance tests done by Mozilla showed it was an order of magnitude faster than other version control systems. Fetching version history from a locally stored repository can be one hundred times faster than fetching it from the remote server. The core part of Git is written in C, which avoids runtime overheads associated with other high level languages.

Scalable:
Git is very scalable. So, if in future , the number of collaborators increase Git can easily handle this change. Though Git represents an entire repository, the data stored on the client’s side is very small as Git compresses all the huge data through a lossless compression technique.

Reliable:
Since every contributor has its own local repository, on the events of a system crash, the lost data can be recovered from any of the local repositories. You will always have a backup of all your files.

Secure:
Git uses the SHA1(Secure Hash Function) to name and identify objects within its repository. Every file and commit is check-summed and retrieved by its checksum at the time of checkout. The Git history is stored in such a way that the ID of a particular version (a commit in Git terms) depends upon the complete development history leading up to that commit. Once it is published, it is not possible to change the old versions without it being noticed.

Economical:
In case of CVCS, the central server needs to be powerful enough to serve requests of the entire team. For smaller teams, it is not an issue, but as the team size grows, the hardware limitations of the server can be a performance bottleneck. In case of DVCS, developers don’t interact with the server unless they need to push or pull changes. All the heavy lifting happens on the client side, so the server hardware can be very simple indeed.

Supports non-linear development:
Git supports rapid branching and merging, and includes specific tools for visualizing and navigating a non-linear development history. A core assumption in Git is that a change will be merged more often than it is written, as it is passed around various reviewers. Branches in Git are very lightweight. A branch in Git is only a reference to a single commit. With its parental commits, the full branch structure can be constructed.

Easy Branching:
Branch management with Git is very simple. It takes only few seconds to create, delete, and merge branches. Feature branches provide an isolated environment for every change to your codebase. When a developer wants to start working on something, no matter how big or small, they create a new branch. This ensures that the master branch always contains production-quality code.

Distributed development:
Git gives each developer a local copy of the entire development history, and changes are copied from one such repository to another. These changes are imported as additional development branches, and can be merged in the same way as a locally developed branch.

Compatibility with existing systems or protocol
Repositories can be published via http, ftp or a Git protocol over either a plain socket, or ssh. Git also has a Concurrent Version Systems (CVS) server emulation, which enables the use of existing CVS clients and IDE plugins to access Git repositories. Apache SubVersion (SVN) and SVK repositories can be used directly with Git-SVN.

What is Git – Role Of Git In DevOps?

Now that you know what is Git, you should know Git is an integral part of DevOps.

DevOps is the practice of bringing agility to the process of development and operations. It’s an entirely new ideology that has swept IT organizations worldwide, boosting project life-cycles and in turn increasing profits. DevOps promotes communication between development engineers and operations, participating together in the entire service life-cycle, from design through the development process to production support.

The entire life cycle of Devops starting from planning the project to its deployment and monitoring. Git plays a vital role when it comes to managing the code that the collaborators contribute to the shared repository. This code is then extracted for performing continuous integration to create a build and test it on the test server and eventually deploy it on the production.

Tools like Git enable communication between the development and the operations team. When you are developing a large project with a huge number of collaborators, it is very important to have communication between the collaborators while making changes in the project. Commit messages in Git play a very important role in communicating among the team. The bits and pieces that we all deploy lies in the Version Control system like Git. To succeed in DevOps, you need to have all of the communication in Version Control. Hence, Git plays a vital role in succeeding at DevOps.