An Elastic Block Store- EBS Volume in AWS is a network drive you can attach to your instances while they run. It allows your instances to persist data.

EBS Volume in AWS come in 4 types as follows- 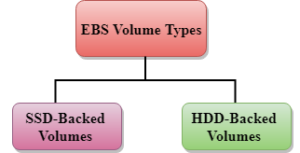 Only GP2 and IO1 can be used as boot volumes.

It is Incremental – only backup changed blocks

Not necessary to detach volume to do snapshot, but recommended

Can copy snapshots across AZ or Region

Can make Image (AMI) from Snapshot

EBS Volumes are only locked to a specific AZ but we can migrate it to a different AZ.

To migrate it to a different AZ (or region):

Some instance do not come with Root EBS volumes. Instead, they come with “Instance Store” (= ephemeral storage)

Instance store is physically attached to the machine where as EBS is a network drive.

EBS is already redundant storage (replicated within an AZ). RAID is possible as long as your OS supports it. Some RAID options are:

Difference between RAID 0 and RAID 1:

What is Auto Scaling in AWS ?