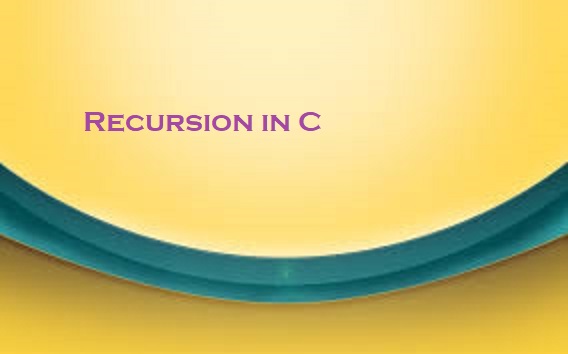 Recursion cannot be applied to all the problems, but it is more useful for the tasks that can be defined in terms of similar subtasks. For Example, recursion may be applied to sorting, searching, and traversal problems.

Generally, iterative solutions are more efficient than recursion since function call is always overhead. Any problem that can be solved recursively, can also be solved iteratively. However, some problems are best suited to be solved by the recursion, for example, tower of Hanoi, Fibonacci series, factorial finding, etc.

In the following example, recursion is used to calculate the factorial of a number.

printf(“Enter the number whose factorial you want to calculate?”);

We can understand the above program of the recursive method call by the figure given below: 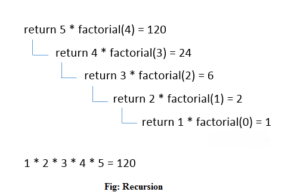 A recursive function performs the tasks by dividing it into the subtasks. There is a termination condition defined in the function which is satisfied by some specific subtask. After this, the recursion stops and the final result is returned from the function.

Pseudocode for writing any recursive function is given below.

Example of recursion in C

Let’s see an example to find the nth term of the Fibonacci series.

Let us consider the following example to understand the memory allocation of the recursive functions.

Let us examine this recursive function for n = 4. First, all the stacks are maintained which prints the corresponding value of n until n becomes 0, Once the termination condition is reached, the stacks get destroyed one by one by returning 0 to its calling stack. Consider the following image for more information regarding the stack trace for the recursive functions.

3 thoughts on “Recursion in C”