You do remember that everything in Python is an object, right? Well, how does Python know what you are trying to access? Think of a situation where you have 2 functions with the same name. You would still be able to call the function you need. How is that possible? This is where namespacing comes to the rescue. Lets see what is Namespacing and Scopes in Python.

Namespacing is the system that Python uses to assign unique names to all the objects in our code. And if you are wondering, objects can be variables and methods. Python does namespacing by maintaining a dictionary structure. Where names act as the keys and the object or variable acts as the values in the structure.

If I would want to access the value ‘Icekand!’ I would simply call the variable name by ‘b’ and I would have access to ‘Iceland!’. These are names. You can even assign methods names and call them accordingly.

Namespacing works with scopes. Scopes are the validity of a function/variable/value inside the function or class they belong to. Python built-in functions namespacing covers all the other scopes of Python. Functions such as print() and id() etc. can be used even without any imports and be used anywhere. Below them is the global and local namespacing. Let me explain the scope and namespacing in a code snippet below :

As you can see with the code above, I have declared 2 functions with the name add() and add2(). You have the definition of the add() and you later call the method add(). Here in add() you call add2() and so you are able to get the output of 12 since 3+4+5 is 12. But as soon as you come out of add2(), the scope of p,q,r is terminated meaning that p,q,r are only accessible and available if you are in add2(). Since you are now in add(), there is no p,q,r and hence you get the error and execution stops. 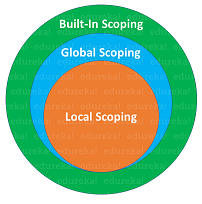 17 thoughts on “Namespacing and Scopes in Python”