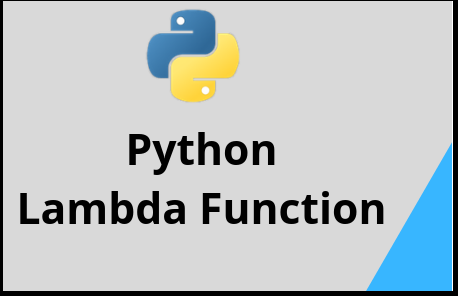 Example of Lambda Function in python

Here is an example of lambda function that doubles the input value.

# Program to show the use of lambda functions

There are at least 3 reasons:

The following is an example of the parameterless lambda function.

We can declare a lambda function and call it as an anonymous function, without assigning it to a variable.

Above, lambda x: x*x defines an anonymous function and call it once by passing arguments in the parenthesis (lambda x: x*x)(5).

Use of Lambda Function in python

We use lambda functions when we require a nameless function for a short period of time.

In Python, we generally use it as an argument to a higher-order function (a function that takes in other functions as arguments). Lambda functions are used along with built-in functions like filter(), map() etc.

Example use with filter()

The filter() function in Python takes in a function and a list as arguments.

The function is called with all the items in the list and a new list is returned which contains items for which the function evaluates to True.

Here is an example use of filter() function to filter out only even numbers from a list.

Example use with map()

The map() function in Python takes in a function and a list.

The function is called with all the items in the list and a new list is returned which contains items returned by that function for each item.

Here is an example use of map() function to double all the items in a list.

Example use with reduce()