In this blog, “Apache Kafka vs Storm: Difference Between Storm and Kafka” we will see the complete comparison for both Kafka and Storm. So, let’s start with the brief introduction of Kafka and Storm to understand the comparison well.

In order to enable communication between Kafka Producers and Kafka Consumers using message-based topics, we use Apache Kafka. It is very fast, scalable and fault-tolerant, publish-subscribe messaging system.

Kafka plays the role of a platform for high-end new generation distributed applications. Moreover, it permits a huge number of permanent or ad-hoc consumers. As a benefit, Kafka is highly resilient to node failures and also offers automatic recovery.

Hence we can say Kafka is the best choice for communication and integration between components of large-scale data system because of this special feature. 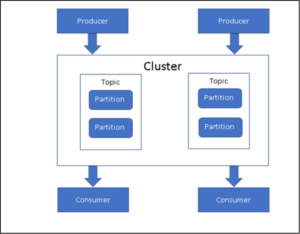 It has various components that work together for the purpose of streaming as well as data processing such as Spout and Bolt. On defining both:

Spout: A source of the stream is what we call Spout.

Bolt: Whereas, Bolt is a component to which, spout passes the data.

Topology: Storm topology is the combination of Spout and Bolt. It is the same as

the Map and Reduces in Hadoop.

Stream: Stream can be considered as Data Pipeline it is the actual data that we received from a data source. Now, let’s start the feature wise Comparison of Kafka Vs Storm.

Here are some Key Differences Between Apache Kafka vs Storm:

Kafka’s role is to work as middleware it takes data from various sources and then Storms processes the messages quickly. Counting and segregating of online votes is the real-time example for Apache Storm.

Apache Kafka vs Storm both are having great capability in the real-time streaming of data and very capable systems for performing real-time analytics.