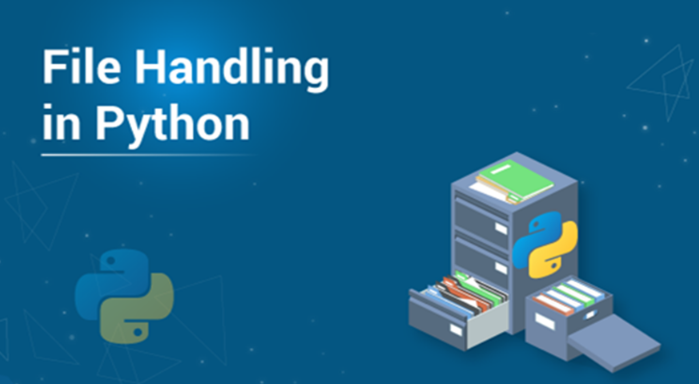 Python too supports file handling and allows users to handle files i.e., to read and write files, along with many other file handling options, to operate on files. This file handling concept in python is also easy and short. Python treats file differently as text or binary and this is important. Each line of code includes a sequence of characters and they form text file. Each line of a file is terminated with a special character, called the EOL or End of Line characters like comma {,} or newline character. It ends the current line and tells the interpreter a new one has begun. Let’s start with Reading and Writing files.

As the part of programming requirement, we have to store our data permanently for future purpose. For this requirement we should go for files.

There are 2 types of files

Before performing any operation (like read or write) on the file, first we have to open that file. For this we should use Python’s inbuilt function open()

But at the time of open, we have to specify mode, which represents the purpose of opening file.

The allowed modes in Python are

1) r ->open an existing file for read operation. The file pointer is positioned at the beginning of the file. If the specified file does not exist then we will get FileNotFoundError. This is default mode.

2) w ->open an existing file for write operation. If the file already contains some data then it will be overridden. If the specified file is not already available then this mode will create that file.

3) a -> open an existing file for append operation. It won’t override existing data. If the specified file is not already available then this mode will create a new file.

4) r+ -> To read and write data into the file. The previous data in the file will not be deleted. The file pointer is placed at the beginning of the file.

5) w+ -> To write and read data. It will override existing data.

6) a+ -> To append and read data from the file.It wont override existing data.

7) x -> To open a file in exclusive creation mode for write operation. If the file already exists then we will get FileExistsError.

We are opening abc.txt file for writing data.

After completing our operations on the file, it is highly recommended to close the file.

For this we have to use close() function.

We can write character data to the text files by using the following 2 methods.

While writing data by using write() methods, compulsory we have to provide line seperator(\n), otherwise total data should be written to a single line.

We can read character data from text file by using the following read methods.

read() -> To read total data from the file

read(n) -> To read ‘n’ characters from the file

readline() -> To read only one line

Closing a File in Python

At last, after opening and performing the reading, writing operations, it is important to close the file. This is done using .close() method. Let’s understand this with an example: