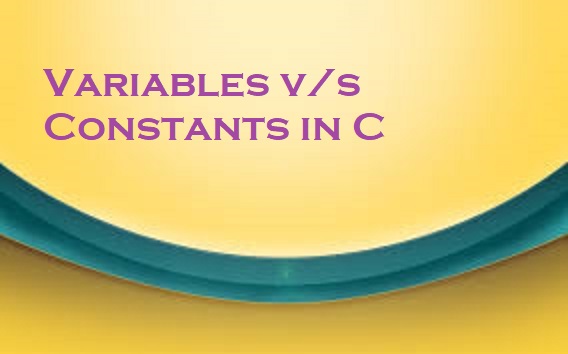 Difference Between Variables and Constants:

What is a variable?

A variable is like a container containing the values or data of a particular data type that helps to execute the program. The value of a variable can change depending on the conditions or information given at the program’s run time. A variable can be defined in both ways, like the uppercase and lowercase letters, digits and the underscores. A variable can store the value of the different data types like integer, float, character, enum.
Rules for defining the variable name in C programming language:

A constant is a fixed value whose value cannot be changed during program’s execution or once the value is defined. It is also known as literal. For example, 5, 20, ‘a’, ‘Radius’, 5.2, “Welcome back”, etc. A constant can be defined in two ways, like #define pre-processor and by const keyword. The constants can be different data types, such as integer constants, floating constants, character constants, string constants and enumeration constants. Let’s understand briefly about them:

It is the character set of string constants that are enclosed in a double quote. The character may be letters, numbers, special symbols and some blank space. Furthermore, a string constant contains zero, one or more continuous character in double quotation marks. For example, “Hello Friends”, “Computer”, “5987”, ” ” , “A”.

Difference between Variables and Constant in C Program:

Please find below Difference Between Variables and Constants in C language –

1 thought on “Difference Between Variables and Constants”