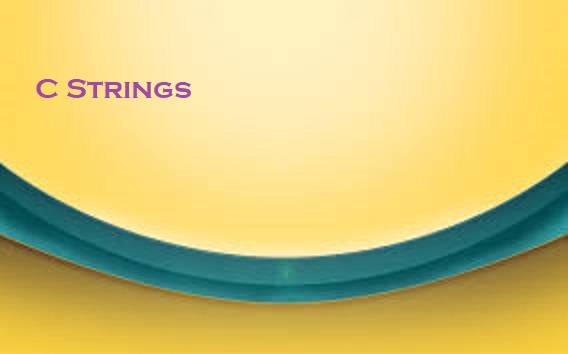 The string can be defined as the one-dimensional array of characters terminated by a null (‘\0’). The character array or the string is used to manipulate text such as word or sentences. Each character in the array occupies one byte of memory, and the last character must always be 0. The termination character (‘\0’) is important in a string since it is the only way to identify where the string ends. When we define a string as char s[10], the character s[10] is implicitly initialized with the null in the memory.

There are two ways to declare a string in c language.

Let’s see the example of declaring string by char array in C language.

As we know, array index starts from 0, so it will be represented as in the figure given below.

While declaring string, size is not mandatory. So we can write the above code as given below:

We can also define the string by the string literal in C language. For example:

In such case, ‘\0’ will be appended at the end of the string by the compiler.

There are two main differences between char array and literal.

Let’s see a simple example where a string is declared and being printed. The ‘%s’ is used as a format specifier for the string in c language.