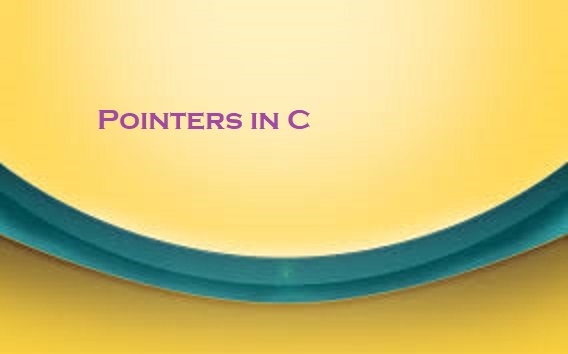 The pointer in C language is a variable that stores the address of another variable. This variable can be of type int, char, array, function, or any other pointer. The size of the pointer depends on the architecture. However, in 32-bit architecture the size of a pointer is 2 byte.

Consider the following example to define a pointer that stores the address of an integer.

int* p = &n; // Variable p of type pointer is pointing to the address of the variable n of type integer.

The pointer in c language can be declared using * (asterisk symbol). It is also known as indirection pointer used to dereference a pointer.

An example of using pointers to print the address and value is given below.

By the help of * (indirection operator), we can print the value of pointer variable p.

Let’s see the pointer example as explained for the above figure.

p=&number;//stores the address of number variable

printf(“Value of p variable is %d \n”,*p); // As we know that * is used to dereference a pointer therefore if we print *p, we will get the value stored at the address contained by p.

Pointer to a function

void(*p)(int) = &display; // Pointer p is pointing to the address of a function

1) Pointer reduces the code and improves the performance, it is used to retrieving strings, trees, etc. and used with arrays, structures, and functions.

2) We can return multiple values from a function using the pointer.

3) It makes you able to access any memory location in the computer’s memory.

There are many applications of pointers in c language.

1) Dynamic memory allocation: In c language, we can dynamically allocate memory using malloc() and calloc() functions where the pointer is used.

2) Arrays, Functions, and Structures: Pointers in c language are widely used in arrays, functions, and structures. It reduces the code and improves the performance.

A pointer that is not assigned any value but NULL is known as the NULL pointer. If you don’t have any address to be specified in the pointer at the time of declaration, you can assign NULL value. It will provide a better approach.

In the most libraries, the value of the pointer is 0 (zero).

There are several things which must be taken into the consideration while reading the complex pointers in C. Lets see the precedence and associativity of the operators which are used regarding pointers.

Here,we must notice that,

To read the pointer, we must see that () and [] have the equal precedence. Therefore, their associativity must be considered here. The associativity is left to right, so the priority goes to ().

Inside the bracket (), pointer operator * and pointer name (identifier) p have the same precedence. Therefore, their associativity must be considered here which is right to left, so the priority goes to p, and the second priority goes to *.

Assign the 3rd priority to [] since the data type has the last precedence. Therefore the pointer will look like following.

The pointer will be read as p is a pointer to an array of integers of size 10.

How to read the following pointer?