Apache Kafka is an open-source stream-processing software platform which is used to handle the real-time data storage. It works as a broker between two parties, i.e., a sender and a receiver. It can handle about trillions of data events in a day.

Kafka is designed for distributed high throughput systems. Kafka tends to work very well as a replacement for a more traditional message broker. In comparison to other messaging systems, Kafka has better throughput, built-in partitioning, replication and inherent fault-tolerance, which makes it a good fit for large-scale message processing applications.

What is Apache Kafka?

Apache Kafka is a software platform which is based on a distributed streaming process. It is a publish-subscribe messaging system which let exchanging of data between applications, servers, and processors as well. Apache Kafka was originally developed by LinkedIn, and later it was donated to the Apache Software Foundation. Currently, it is maintained by Confluent under Apache Software Foundation. Apache Kafka has resolved the lethargic trouble of data communication between a sender and a receiver.

We use Apache Kafka when it comes to enabling communication between producers and consumers using message-based topics. Apache Kafka is a fast, scalable, fault-tolerant, publish-subscribe messaging system. Basically, it designs a platform for high-end new generation distributed applications. Also, it allows a large number of permanent or ad-hoc consumers. One of the best features of Kafka is, it is highly available and resilient to node failures and supports automatic recovery. This feature makes Apache Kafka ideal for communication and integration between components of large-scale data systems in real-world data systems.

Kafka technology replaces the conventional message brokers, with the ability to give higher throughput, reliability, and replication like JMS, AMQP and many more. In addition, core abstraction Kafka offers a Kafka broker, a Kafka Producer, and a Kafka Consumer. Kafka broker is a node on the Kafka cluster, its use is to persist and replicate the data. A Kafka Producer pushes the message into the message container called the Kafka Topic. Whereas a Kafka Consumer pulls the message from the Kafka Topic.

The main task of managing system is to transfer data from one application to another so that the applications can mainly work on data without worrying about sharing it.

Distributed messaging is based on the reliable message queuing process. Messages are queued non-synchronously between the messaging system and client applications.

There are two types of messaging patterns available:

Here, messages are persisted in a queue. Although, a particular message can be consumed by a maximum of one consumer only, even if one or more consumers can consume the messages in the queue. Also, it makes sure that as soon as a consumer reads a message in the queue, it disappears from that queue.

Here, messages are persisted in a topic. In this system, Kafka Consumers can subscribe to one or more topic and consume all the messages in that topic. Moreover, message producers refer publishers and message consumers are subscribers here.

Previously, LinkedIn was facing the issue of low latency ingestion of huge amount of data from the website into a lambda architecture which could be able to process real-time events.

As a solution, Apache Kafka was developed in the year 2010, since none of the solutions was available to deal with this drawback, before.

It publishes messages to a Kafka topic.

Consumers take one or more topics and consume messages that are already published through extracting data from the brokers.

These are basically systems which maintain the published data. A single broker can have zero or more partitions per topic.

With the help of zookeeper, Kafka provides the brokers with metadata regarding the processes running in the system and grants health checking and broker leadership election.

We view log as the partitions. Basically, a data source writes messages to the log. One of the advantages is, at any time one or more consumers can read from the log they select. Here, the below diagram shows a log is being written by the data source and read by consumers at different offsets.

By Kafka, messages are retained for a considerable amount of time. Also, consumers can read as per their convenience. However, if Kafka is configured to keep messages for 24 hours and a consumer is down for time greater than 24 hours, the consumer will lose messages. And, messages can be read from last known offset, if the downtime on part of the consumer is just 60 minutes. Kafka doesn’t keep state on what consumers are reading from a topic.

There are few partitions in every Kafka broker. Each partition can be either a leader or a replica of a topic. In addition, along with updating of replicas with new data, Leader is responsible for all writes and reads to a topic. The replica takes over as the new leader if somehow the leader fails.

We have already learned the basic concepts of Apache Kafka. These basic concepts, such as Topics, partitions, producers, consumers, etc., together forms the Kafka architecture.

Below are the 4 important API’s of Apache Kafka:

This API allows/permits an application to publish streams of records to one or more topics. (discussed in later section)

This API allows an application to subscribe one or more topics and process the stream of records produced to them.

This API executes the reusable producer and consumer APIs with the existing data systems or applications. 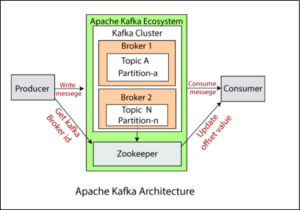 A Kafka cluster is a system that comprises of different brokers, topics, and their respective partitions. Data is written to the topic within the cluster and read by the cluster itself.

Here, we are listing out some of the advantages of Kafka. Basically, these Kafka advantages are making Kafka ideal for our data lake implementation.

Without having not so large hardware, Kafka is capable of handling high-velocity and high-volume data. Also, able to support message throughput of thousands of messages per second.

It is capable of handling these messages with the very low latency of the range of milliseconds, demanded by most of the new use cases.

One of the best advantages is Fault Tolerance. There is an inherent capability in Kafka, to be resistant to node/machine failure within a cluster.

Durability refers to the persistence of data/messages on disk. Also, messages replication is one of the reasons behind durability, hence messages are never lost.

Without incurring any downtime on the fly by adding additional nodes, Kafka can be scaled-out. Moreover, inside the Kafka cluster, the message handling is fully transparent and these are seamless.

The distributed architecture of Kafka makes it scalable using capabilities like replication and partitioning.

Kafka is able to handle thousands of messages per second and that too in low latency conditions with high throughput. In addition, it permits the reading and writing of messages into it at high concurrency.

As we discussed above that the messages are persistent, that makes it durable and reliable.

Kafka could also be employed for batch-like use cases and can also do the work of a traditional ETL, due to its capability of persists messages.

12. Variety of Use Cases

It is able to manage the variety of use cases commonly required for a Data Lake. For Example log aggregation, web activity tracking, and so on.

It is good to know Kafka’s limitations even if its advantages appear more prominent then its disadvantages. However, consider it only when advantages are too compelling to omit.

Here is one more condition that some disadvantages might be more relevant for a particular use case but not really linked to ours. So, here we are listing out some of the disadvantage associated with Kafka:

1. No Complete Set of Monitoring Tools

It is seen that it lacks a full set of management and monitoring tools. Hence, enterprise support staff felt anxious or fearful about choosing Kafka and supporting it in the long run.

As we know, the broker uses certain system calls to deliver messages to the consumer. However, Kafka’s performance reduces significantly if the message needs some tweaking. So, it can perform quite well if the message is unchanged because it uses the capabilities of the system.

There is an issue that Kafka only matches the exact topic name, that means it does not support wildcard topic selection. Because that makes it incapable of addressing certain use cases.

There can be a problem because of the lack of pace, while API’s which are needed by other languages are maintained by different individuals and corporates.

In general, there are no issues with the individual message size. However, the brokers and consumers start compressing these messages as the size increases. Due to this, when decompressed, the node memory gets slowly used. Also, compress happens when the data flow in the pipeline. It affects throughput and also performance.

Sometimes, it starts behaving a bit clumsy and slow, when the number of queues in a Kafka cluster increases.

Some of the messaging paradigms are missing in Kafka like request/reply, point-to-point queues and so on. Not always but for certain use cases, it sounds problematic.

There are several use cases of Kafka that show why we actually use Apache Kafka.

Kafka is the best substitute for traditional message brokers. We can say Kafka has better throughput, replication, fault-tolerance and built-in partitioning which makes it a better solution for large-scale message processing applications.

Kafka is a great backend for applications of event sourcing since it supports very large stored log data.

In this Apache Kafka Tutorial, we have seen the whole concept of Apache Kafka and seen what is Kafka. Moreover, we discussed Kafka components, use cases, and Kafka architecture. In next blog, we will see Kafka Alternatives and it’s comparisons.