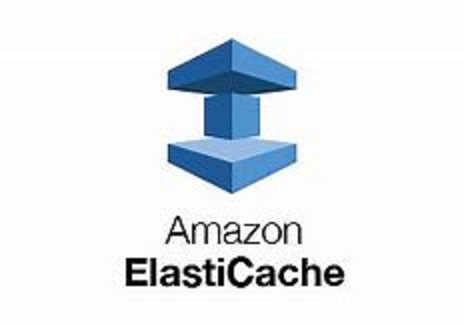 Amazon ElastiCache is a managed caching service compatible with both Redis and Memcached. When it comes to Redis, ElastiCache offers a fully managed platform that makes it easy to deploy, manage, and scale a high performance distributed in-memory data store cluster. These capabilities can significantly decrease the operational overhead in maintaining machines, software patching, monitoring, failure recovery, and backups.

Amazon ElastiCache is fully compatible with the usual Redis data structures, APIs, and clients, allowing your existing applications that already use Redis to start using ElastiCache without any code changes. It supports both Redis cluster and non-cluster modes, providing enhanced high availability and reliability, with automatic failover scenarios across availability zones.

With the support of online cluster resizing, ElastiCache makes it easy to scale in or out in order to adapt to changing system demands without any downtime. From a security and compliance point of view, AWS ElastiCache has built-in VPC support and offers encryption in-transit and at-rest capabilities, combined with the native Redis AUTH feature for authentication and authorization support.

From the Amazon ElastiCache documentation, we learn that ElastiCache has features to enhance reliability for critical production deployments, including:

Automatic failover (Multi-AZ) of a failed primary cluster to a read replica in Redis replication groups.

Helps reduce load off of databases for read intensive workloads

Redis is a newer technology and often considered as a superset of Memcached. That means Redis offers more and performs better than Memcached.

2) HIGHLY AVAILABLE AND RELIABLE: Amazon ElastiCache for Redis supports both Redis cluster and non-cluster modes and provides high availability via support for automatic failover by detecting primary node failures and promoting a replica to be primary with minimal impact. It allows for read availability for your application by supporting read replicas (across availability zones), to enable the reads to be served when the primary is busy with the increased workload. ElastiCache for Redis supports enhanced failover logic to allow for automatic failover in cases when majority of the primary nodes for Redis cluster mode are unavailable.

3) EASILY SCALABLE: With Amazon ElastiCache for Redis, you can start small and easily scale your Redis data as your application grows – all the way up to a cluster with 340 TB of in-memory data. It allows you to scale your Redis Cluster environment up to 500 nodes and 500 shards. It supports online cluster resizing to scale-out and scale-in your Redis clusters without downtime and adapts to changing demand. To scale read capacity, ElastiCache allows you to add up to five read replicas across multiple availability zones. To scale write capacity, ElastiCache supports Redis cluster mode which enables you to partition your write traffic across multiple primaries.

Memcached is an open source, distributed, in-memory key-value store-caching system for small arbitrary data streams flowing from database calls, API calls, or page rendering. Memcached has long been the first choice of caching technology for users and developers around the world.

Amazon ElastiCache for Memcached is a Memcached-compatible in-memory key-value store service that can be used as a cache or a data store. It delivers the performance, ease-of-use, and simplicity of Memcached. ElastiCache for Memcached is fully managed, scalable, and secure – making it an ideal candidate for use cases where frequently accessed data must be in-memory. It is a popular choice for use cases such as Web, Mobile Apps, Gaming, Ad-Tech, and E-Commerce.

1) Caching: Amazon ElastiCache for Memcached is a great choice for implementing an in-memory cache to decrease access latency, increase throughput, and ease the load off your relational or NoSQL database. Amazon ElastiCache can serve frequently requested items at sub-millisecond response times, and enables you to easily scale for higher loads without growing the costlier backend database layer. Database query results caching, persistent session caching, and full-page caching are all popular examples of caching with ElastiCache for Memcached.

2) Session Store: Session stores are easy to create with Amazon ElastiCache for Memcached. Simply use the Memcached hash table, which can be distributed across multiple nodes. Scaling the session store is as easy as adding a node and updating the clients to take advantage of the new node

All caches in ElastiCache: 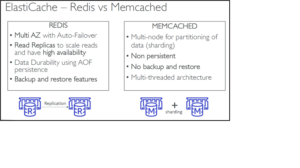 1) Lazy Loading: all the read data is cached, data can become stale in cache

2) Write Through: Adds or update data in the cache when written to a DB (no stale data)

Fully managed: You no longer need to perform management tasks such as hardware provisioning, software patching, setup, configuration, monitoring, failure recovery, and backups. ElastiCache continuously monitors your clusters to keep your workloads up and running so that you can focus on higher value application development.

Global Datastore in Amazon ElastiCache for Redis provides fully managed, fast, reliable and secure cross-region replication. With Global Datastore, you can write to your ElastiCache for Redis cluster in one region and have the data available to be read from two other cross-region replica clusters, thereby enabling low-latency reads and disaster recovery across regions.

You can setup a Global Datastore by starting with an existing cluster, or by creating a new cluster to be used as a primary. Creating Global Datastore takes just a few clicks in the AWS Management Console for ElastiCache, or can be automated by downloading the latest AWS SDK or CLI. Global Datastore is not yet supported on AWS CloudFormation.

1) Write locally, read globally: With Global Datastore, you can write to your ElastiCache for Redis cluster in one region and have the data available to be read from two other cross-region replica clusters to enable low-latency local reads. With typical cross-region replication latency of under 1 second, your applications enjoy quick data access across regions.

2) Secure: Global Datastore for Redis uses encryption in-transit for cross-region traffic to keep your data secure. Additionally, you can also encrypt your primary and secondary clusters using encryption at-rest to keep your data secured end-to-end. Each primary and secondary cluster can have a separate customer managed customer master key (CMK) in AWS Key Management Service (KMS) for encryption at rest.

3) Easy to set-up: Global Datastore eliminates the complexity and operational burden of deploying, managing and replicating data in clusters across regions. You can set-up a Global Datastore by starting with an existing cluster, or by creating a new cluster to be used as primary. Creating a Global Datastore for Redis creation takes just a few clicks in the Amazon AWS ElastiCache Management Console for ElastiCache, or can be automated by downloading the latest AWS SDK or CLI.

4) Cross-region disaster recovery: In the unlikely event of regional degradation, one of the cross-region replica clusters in the Global Datastore can be promoted to become the primary cluster with full read/write capabilities in less than 1 minute, allowing your applications to remain available.

What is Amazon RDS? What are RDS Backups?